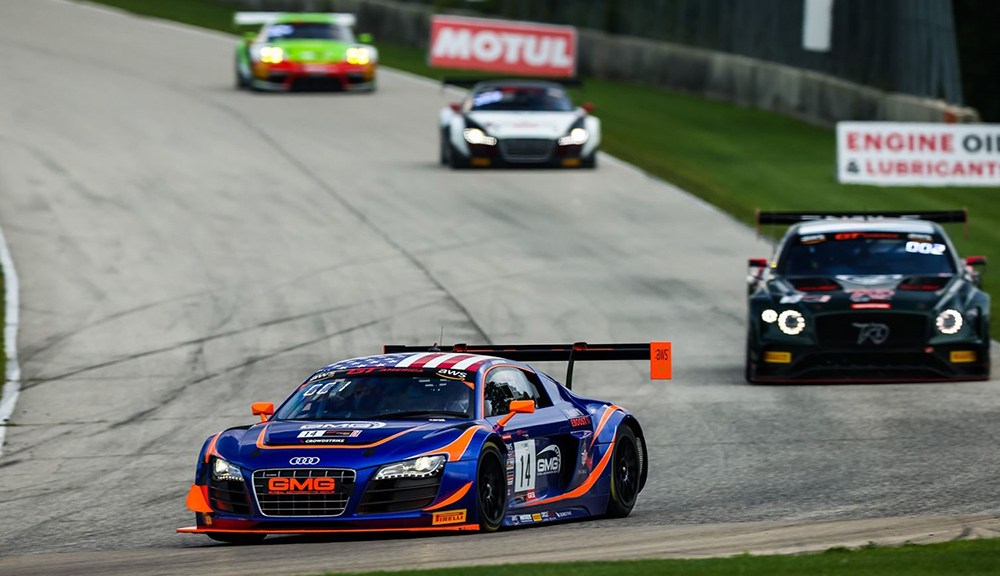 James Sofronas, No.14 Audi R8 LMS GMG Racing driver, finished the trifecta of the one-day race in GT America with a flag-to-flag victory in pole position which also involved winning the quick lap of the race, tentatively opening the door for a flag-to-flag rehearsal in Sunday’s competition. Charlie Luck (# 45 Porsche 911 GT3 R 991.2) managed to hold back most of the field to claim the flag-to-flag victory of the Masters podium, while Sean Quinlan (BMW M4 GT4 Stephen Cameron Racing # 119) accomplished the same feat in the GT4 category.

The GT America race started with Jason Daskalos (# 27 Audi R8 LMS Daskalos Motorsports) executing an excellent pass over GT America leader Luck on the starting lap to immediately move up to three positions in third and Sofronas working to perfect his line to extend his gap to second place Gidley. Luck then started planning to regain the position and more of Daskalos, but was eventually joined by Andy Wilzoch (# 460 Flying Lizard Motorsports Porsche 911 GT3 R 991.2), Jeff Burton (# 91 Lamborghini Huracan GT3 Rearden Racing ) and Jason Harward apply pressure from behind and compete for the same spot.

Jason Bell (No.2 GMG Racing Aston MArtin Vantage AMR GT4) also took steps forward to take the P1 away from the category leader and qualified for pole Quinlan, with P3 qualifier Chris Cagnazzi (No.39 RENNtech Motorsports Mercedes-AMG GT4). The two fought for a while when Quinlan managed to pass and regain the lead of the class. Alex Welch (Audi R8 LMS GT4 # 76 ROTR), Scott Noble (Porsche 718 Cayman GT4 CS MR # 49 NOLASPORT) and Rob Holland (Ford Mustang GT4 Rotek Racing # 99) finally packed up and embarked on a battle for fourth in his class.

Towards the halfway point of the 40-minute sprint, Luck had regained his position on Daskalos and proceeded to systematically widen his lead over the Audi driver and move closer to second overall in an incident with Adam Adelson (n ° 120 Premier Racing Porsche 718 Cayman GT4 CS MR) saw him fall to the back of the field, moving the other competitors closer to the front of their respective categories. Daskalos and Wilzoch fought and switched positions while Harward passed Burton and entered the SRO3 podium category.

As rain loomed in the distance and the clock ticked towards the remaining 5 minutes mark, the battles within and between the classes for position became more intense with Harward applying pressure on Wilzoch and Daskalos with a bumper race. three-way coherent. However, a wandering move cost Harward a few seconds and caused him to retreat further from the Daskalos-Wilzoch battle, but not before Daskalos passed Wilzoch and began to move away. On the last lap of the race, however, Daskalos’ Audi suffered a mechanical problem in turn 5 and abandoned the race, unable to cross the finish line on its own accord. Sofronas and Gidley would finish 1-2 overall, with Harward completing the category podium, his first, in fifth overall. Withheld, Luck would settle for a victory on the SRO3-M podium with Wilzoch behind him in second position and Burton holding sixth place overall and third place in the Masters class.

A little further in the GT4 charge led by Quinlan, Bell lost position to Chris Cagnazzi (RENNtech Motorsports Mercedes-AMG GT4 # 39), who had methodically kept pace throughout the race until that he took second place the last time. knees. The class would eventually end in that order – first, second, and third.

Results are provisional until the final posted. The green flag drops for Race 2 at 8:30 am CT Sunday. Watch the race live on the GT World YouTube channel, get simulcast audio on SiriusXm Satellite Radio SXM392 (channel 992 on the app) and view the timing and scores live at gtamerica.us/live